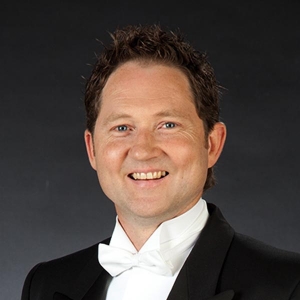 Murray is a product of retired Australian tenor, Raymond MacDonald with whom he trained and studied with for 18 years developing into a true operatic tenor.

In 1993 he undertook his first professional engagement with Opera Australia in a principle role of an apprentice in Wagner’s Die Meistersinger von Nuremburg. He again performed this role in 2003. His association with Opera Australia, continued for 15 years and enabling him to perform at the Sydney Opera House in an extensive list of operas and operettas. Other principle roles have included ‘The Priest’ in Madame Butterfly and ‘The Herald’ in Don Carlo. He has performed as guest tenor soloist in concerts including several ‘Messiah’s’, Mozarts ‘Reqium’, and has made many appearances as a soloist performing in concerts and performing the National Anthem at sporting events. Murray, is a diverse singer and expanded his performance craft from the Opera House into the Corporate arena.

He is a sort after performer and works in one of the biggest ‘corporate’ worldwide shows ‘The Three Waiters’. He also performs and tours with ‘The Australian Tenors’, ‘Figaro’, Australia’s Opera Divo and ‘The Proms’ touring concerts. He has performed at major launches of companies including, Lexus, Mercedes, Tiffanys, Emirates, Qantas, and sung a vast array of repertoire including Operatic, Musical Theatre and PopOpera throughout Korea, Malaysia, Japan, Indonesia, Hong Kong, Singapore, India, China, New Zealand and all over Australia. Murray’s voice has also been used in TV and radio advertising campaigns.