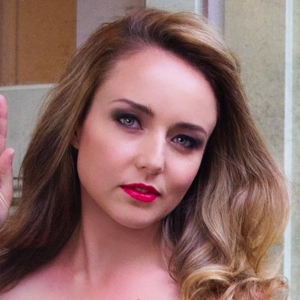 Michaela holds a Bachelor of Music with Honours in vocal performance from the Royal College of Music, studying with Welsh soprano Eiddwen Harrhy.

Roles include: Calisto in the Australian premiere of Offenbach’s Daphnis and Chloe with Pacific Opera, Rebecca Steinberg in the Australian premiere of It Shoulda Been You, a variety of roles in Charody Productions’ circus operas, Lucille in Rossini’s The Silken Ladder with Sydney Independent Opera, and Rose Pickles in the creative development of Cloudstreet: the opera.

Michaela was a member of the 7 Sopranos from 2011-17, and was featured on their debut, self-titled album on the ABC Classics label. Featured television appearances include Underbelly: the Golden Mile (Nine Network), Rake (ABC1), and Home and Away (Seven Network).

Michaela was a cast member of The Phantom of the Opera UK and Ireland Tour with Cameron Mackintosh in 2020 when Covid-19 forced the production to close. She moved back to Sydney and is very happy to be back home performing once again in Australia.