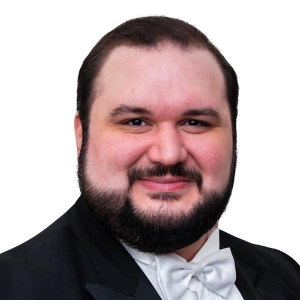 Lorenzo’s concerts and cabaret performances are filled with warmth and humour. He also brings power and passion to his performances with some of the great Tenor repertoire from the popular Musical Theatre songs such as This is the Moment and The Impossible Dream, to the most well known Operatic arias such as La Donna è Mobile and Nessun Dorma, and the traditional Neapolitan songs such as Funiculì Funiculà and O Sole Mio.

Lorenzo Rositano is an Italianate Operatic Tenor who began singing at the age of 7. He studied in the UK, Italy and completed his studies in Australia at the Sydney Conservatorium of Music with a Masters in Opera.

Lorenzo has appeared as Principal Tenor in many Opera and Operetta roles as well as Soloist in Oratorio works and Recital around Australia and abroad.

Since 2017 Lorenzo has been touring as one of five Tenors in the internationally renowned group The Australian Tenors.

Lorenzo appears regularly as a featured soloist on Australian TV. His most recent TV appearance was his performance of Nessun Dorma in the 2021 Australia Day Concert, live from the iconic Sydney Opera House. https://vimeo.com/510070013

Lorenzo made international headlines when he was selected by the Australian Olympic Committee to perform the Australian Anthem at the Winter Olympic Games in Turin, Italy.

Following his return to Australia from Italy, Lorenzo has made it his mission to bring Opera more regularly to Western Sydney. Consequently, Lorenzo is the Founder & Artistic Director of Western Sydney Opera.

The Australian Tenors in Wyong NSW on te%