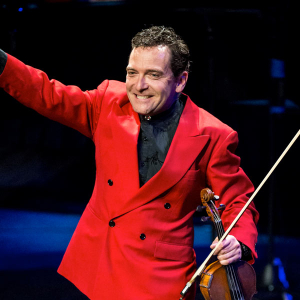 Ian Cooper was commissioned to compose and perform the “Tin Symphony” for the opening ceremony of the 2000 Summer Olympic Games in Sydney. The event was televised worldwide with an estimated 2.85 billion viewers. He is Australia’s most exciting virtuoso violinist and his high-energy and humorous performances draw on musical styles from Classical, Gypsy, Jazz, Irish, Tango, Latin, the Blues and even a touch of Cowboy music.

In August 2015 Ian was the guest artist of guitarist Tommy Emmanuel for his Australian tour and joined him on stage at the Sydney Opera House, Melbourne and Brisbane Concert Halls. Cooper and Emmanuel released an album together in July called “Just Passing Through.” Cooper said “I’m thrilled with this recording. Tommy has brought out some of my best violin playing ever!!”

Following the success of an outback tour with pianist Simon Tedeschi in 2013, Ian was invited back to present his show “Classics, Gypsy and Jazz” for the Queensland Music Festival in 2015. Together with pianist Ambre Hammond they presented 16 concerts and master-classes in remote towns in Far North Queensland.

The Australian composer Matthew Dewey was commissioned to compose a work for Symphony orchestra and three soloists – Ian Cooper, trumpeter James Morrison and Ambre Hammond. “Symphony for the Inland Sea” was premiered in July 2015 as part of the “Mount Isa Celebrates” event. The orchestra, made up of Mount Isa residents and guest artists from the Queensland Symphony, shared the stage with more than 300 musicians including the Mount Isa Community Chorus and Combined Schools Choir. The concerts were billed as being performed by the most remote symphony orchestra in the world.

Born into a family of classical musicians Ian Cooper began learning the violin from his mother at the age of four. His first live television appearance was at age 5 where he performed “The Three Grenadiers” by Schumann on Channel 7 Australia, and his Sydney Opera House debut was at age 6. Ian soon began his world travels and wowed audiences as a child star in the U.S.A. and Canada, and later in Britain, Europe and Japan for NHK TV. At age 12 he performed with the Vienna Boys Choir in their hometown. Ian was awarded a scholarship to the New South Wales Conservatorium of Music at age eight and continued his training there for the next ten years.

After meeting the famed French violinist Stéphane Grappelli Ian swung his attention towards Jazz, and his fiery approach to the Devil’s Instrument became reminiscent of the 1930’s Quintet of the Hot Club of France. A result of touring and endeavoring to perform with locals wherever he travels, Ian has added Gypsy and Irish music to his exciting repertoire. Never forgetting his love of Classical music, Ian still continues to perform concerts as a soloist with orchestras. Ian has released 10 CDs, the latest being “Just Passing Through” with Australian Guitarist Tommy Emmanuel.

Among his many live performance accolades, Ian Cooper has received 5 Golden Fiddle Awards, 2 MO Awards, 3 ACE Awards, and has been honored with a platinum ARIA Award – the Australian equivalent of the Grammys. Ian is also a qualified pilot and flies his band to concerts around Australia. He has composed soundtracks for Discovery Channel and is a keen yachtsman in his spare time.

Back to The Proms